Allisn wrote her latest Afro-fusion single titled “Another Day” during a time in her life when, despite having big aspirations, felt no drive or motivation to go after them. Each day was the same, struggling to put the effort into making her dreams become a reality. “Another Day” is a call-to-action, a reminder to get up, get moving, and create the reality you want. Don’t let another day pass without putting in the work to reach your goals!
The track, which was produced by the legendary “Jayso,” features elements of Highlife mixed with a heavy bass and smooth vocals. The music video for “Another Day” is expected to be released Friday, May 15th.
Shatta Wale – Fapimso (Prod. by Gigz Beatz) [Download]

Allisn is an American singer/songwriter, born and raised in Austria and Israel/Palestine. Having grown up amongst many Ghanaians and Nigerians, Allisn was introduced to West African music and culture from a very young age. After playing music around the world and spending over a year traveling throughout the Caribbean and Latin America, Allisn relocated to Accra, Ghana in 2017. Inspired by the musical influences she encountered during her travels and while in Ghana, Allisn set out to create an album of her own style of Afro-fusion music, mixing traditional elements of Afro rhythms and beats with Western pop/alternative influences. Her debut single “Kwesi” was released late last year. Her latest single “Another Day” is the 4th track off of her debut EP expected to be released in June, 2020. 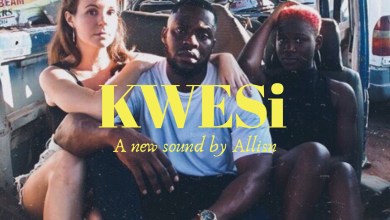