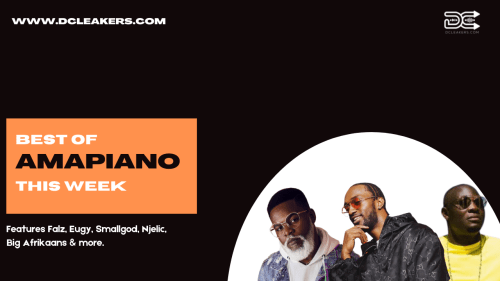 British-Ghanaian singer, Eugy is making great strides towards the release of his impending 6 track-list extended play dubbed ‘Home Run’ which is currently available for pre-order.

Two songs namely; BomBomBom and Osu Freestyle featuring Dancegod Llyod and Medikal respectively have already been released off the album. Eugy scoops a third off the project and it entitled ‘I Need A Boo’.

‘I Need A Boo’ is an Amapiano inspired song with an exciting and easy to sing along verse from Ghanaian singer-songwriter and producer, Kuami Eugene.

Credits to Nektunez for the outstanding production on ‘I Need A Boo’.

Nigerian singer-songwriter, rapper and actor Falz releases his first Amapiano single after making several contributions on other Amapiano tunes he was featured on.

He employs the services of South African vocal powerhouses Bontle Smith and Sayfar who are quite adept and experienced with what is adjudged the biggest genre in Africa right now, Amapiano.

Davido and Focalistic have linked up again after delivering the monster hit track ‘Ke Star (Remix)’ which is currently dominating clubs and parties all over the world.

Prior to the release of this collaborative effort titled ‘Champion Sound’, the Nigerian Afrobeat star Davido and the South African artist and producer, Focalistic were spotted in the studio working on a joint extended play together. The relationship between the duo has really blossomed since the release of Ke Star Remix which they intend strengthening with more musical project.

Focalistic booming career took a great turn with his collaboration with Davido and he will be looking for more dominance with Champion Sound, having toured Nigeria at least 3 times and growing wings across borders with performances in Dubai, Ghana, London and other nations.

As it stands, a Davido and Focalistic combo can never go wrong.

DJ K Crakk is one of Ghana’s most proficient djs who’s been at the helm of the city’s major nightlife events. His dexterity behind the decks has accorded him honors at the Ghana DJ Awards and other relevant entertainment awards scheme in Ghana.

Furthermore, DJ K Crakk has over the years treated his listeners and followers to exciting mixtapes of different genres to suit every taste bud. He is serving us with a new musical project but this time around not a project created behind the decks but in the studio.