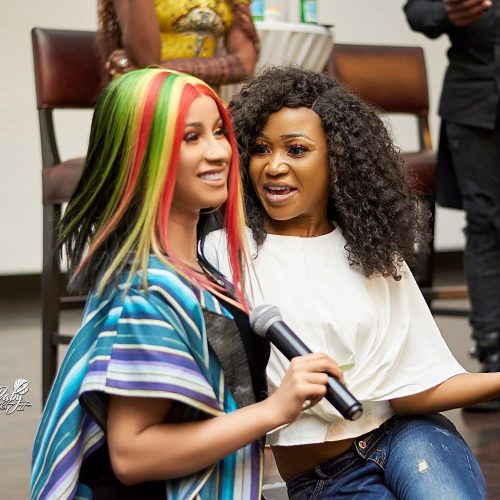 Video vixen, Rosemond Brown, popularly known in media circles as Akuapem Poloo claims Cardi B was overly excited the moment the rapper spotted her and that is undisputed as several persons who were at the ‘meet and greet session witnessed the epic moment.

“You can ask all the stars who were present at the meeting. Cardi B went mad when she set her eyes on me… She screamed out loud and pulled her tongue out which caused me to tremble and smile at the same time” Akuapem Poloo said in an interview with Zionfelix.

The actress who now boasts of being the ‘queen of twerking in Ghana’ further disclosed that had the pop star refused to honour the “meet and greet” session with Ghanaian celebrities, she would have presented honey to her during her stage performance.

“Bola Ray, GH Kwaku, Konkonsa and other promoters were even aware of my plans so I’m glad I finally met her and that’s a dream come through,” she added.

Meanwhile the American rapper has described Akuapem Poloo as her twin after she shared an adorable photo of the video vixen on her Instagram story.

Cardi B’s post comes at the back of the crazy time she had with Akuapem Poloo during her recent controversial ‘meet and greet’ with a section of the Ghanaian media and celebrities when she was in the country for a concert.