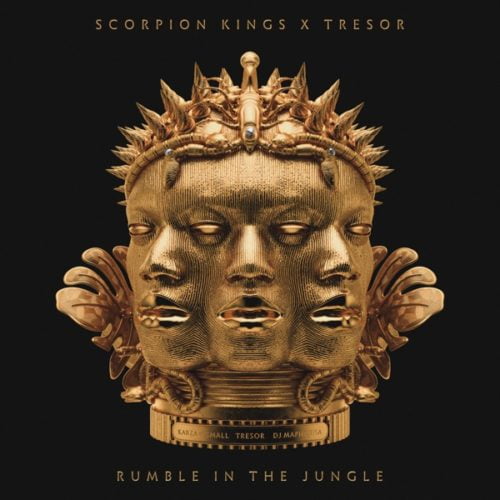 Singer Tresor joins forces with Scorpion Kings—a production duo consisting of DJ Maphorisa and Kabza De Small—for an amapiano-powered extravaganza of pan-African melodies. Dovetailing his iteration of pop into amapiano soundscapes, he references Afrobeats, bubblegum, salsa, kwasa kwasa and rumba with expressions both deeply rooted and kaleidoscopic. “We went back to the source and tapped into sounds from all over the continent for this album,” TRESOR tells Apple Music. “This is special for me because it represents a statement of pride in our diversity and embraces the rich musical landscape of our home.”

That embrace sees South African rhythms meet Congolese percussion, intertwined with East African melodies and West African chants. We time-travel to South Africa’s late ’80s on the disco-leaning “Starry Night” before teleporting to Rio’s shores on “Angelina” and capturing Bamako’s dance floors through the lens of Malick Sidibé. “RUMBLE IN THE JUNGLE is a sonic roar and cultural bridge bringing people together through music,” he continues. “You’ll find a treasure of your own on this record.” True to form, TRESOR positions the album in a fitting historical context that suggests the coming together of African cultures will reverberate across the world. “The title references the massive fight that happened between George Foreman and Muhammad Ali in Congo,” he says. “I’ve gotten to really understand the cultural importance of that fight. It brought the continent—and Black people from all over the world—together.” He talks through each song below.

“This is pretty much a tale set in the late ’60s or early ’70s of a man taking a train back home to try regain his love. Bra Hugh Masekela used to tell me about mine workers who used to go far out to look for a better life. Maybe they were newly married or had just fallen in love, but had to leave home because you couldn’t be spending your days out on the streets. They’d come back a few years later and find that their wives or the women they loved had started new families, fallen in love and basically moved on.”

“This was the last song I recorded for this album, and you can hear Bamako and Dakar in it. I imagined that this would be such a cool song to be playing while Malick Sidibé took black-and-white photos of people dancing. The response to this has been amazing, and even though people don’t understand the language, they connect with the music. The beauty of storytelling is people can relate to a love song where you’re trying to ask for a ceasefire.”

“Papa Wemba has a beautiful rags-to-riches movie that goes by this title. It’s very iconic: the first movie he ever did in Congo. Here I sing about perseverance and overcoming your hardships in French and Kiswahili. This is the most personal song on the album and is a dedication to my late mum, Elisabeth Mulegwa. It’s written in the words she used to tell me: ‘Life belongs to the courageous and you must keep going.’ I grew up in Goma—a small city in eastern DRC, a rough part of the country. We experienced wars and armed conflicts in which I lost both my parents at 16. From then on I started a journey to find myself and build my own path. This led me to South Africa, after months of travelling by foot and bus. My mother’s resilient spirit and life advice has kept me going throughout my journey. She always told me to find beauty in chaos and that life belongs to the bold.”

“I’ve always liked the name Sade, who is one of my favourite African musicians. Her fashion sense and music is iconic. I’m also very passionate about the ’70s and ’80s nightlife eras of vibrant cities like Kinshasa and Lagos. I believe those eras paved the way for the incredible pop culture moments we’re having in Africa at the moment. When you look at the fashion and how we carry ourselves, most of it is not new. It comes from what I call the golden era of African pop culture. Though it wasn’t well-documented or celebrated, that’s been the source for global culture, be it the hairstyles, fashion, choreography or sounds. This song is inspired by those eras and their sense of pride and unapologetic youthfulness. It’s also a celebration of the beauty of African women.”

“On ‘Soro’ you can hear a lot of West African elements. It’s a regal African song. It gives me the feel of being on a camel somewhere in the Sahara Desert. I just sat in the room and watched Maphorisa and Kabza at work. The production is amazing and so was their approach. They live in the moment and are always having so much fun, breaking into dance any instant! They capture things really fast, and that’s beautiful because it’s so spontaneous!”

“Dust in the Wind” (feat. Beatenberg)

“I started this song and spent a day with Matt [Field, Beatenberg’s lead singer] writing it over Zoom. I think this is definitely going to be one of the standouts on the album ’cause it’s just different! This song can play anywhere around the world—it’s amapiano with alternative-pop elements, maskandi and a little mbaqanga. This one just opens up a whole new sonic lane for amapiano.”

“This is one of the songs I recorded right on the spot. Kabza started making this beat and I said, ‘I’m taking that.’ The song was produced, written and recorded within that hour! This has a salsa vibe and South American feel to it. It’s reminiscent of a night of fun somewhere in Maputo or Rio, having an incredible time…sweating and dancing with beautiful people under city lights.”

“‘Cherie’—which means ‘darling’ or ‘sweetheart’—is Kinshasa-inspired. It’s based on playful high school stories. When I was young I was very shy, and this is me just asking my darling if we can talk. Of course I’ve gained more confidence now, but I feel we sometimes forget the beautiful experience of growing up. I had a beautiful childhood, and how I confidently walk in the world now is based on my experiences and how I was brought up.”

“It’s a great thing mali means pretty much the same thing in different African languages, so we wanted to play with that. Throughout the album there’s Kiswahili, French, Zulu, English and Lingala. ‘Mali Mali’ is speaking about the state of things when you’re young. You don’t have wealth but can still do nice things that don’t really require money. So the bridge goes, ‘I have nothing, my sister, but I’ll take you throughout Kinshasa.’ There’s a beautiful, youthful innocence here.”

“‘Neriyah’ is a shining star in Kiswahili, and this song is dedicated to my little sister, who’s late. It’s a grieving song, you might say, but it’s also a celebration of life and me gaining an angel. The main lyrics are ‘Every time I sleep…I see you shining bright in the skies like a star.’

“I originally wrote this song for Zahara’s second album. It means ‘forgive me’ in Lingala. It’s about someone that has done wrong who’s reaching out and wanting to come right.”

“This song is about finding a beautiful human being that you feel you connect with on another level: ‘The love is sweet like honey.’ It’s basically professing the beauty of this incredible African woman that I’m with.”

“‘Starry Night’ is influenced by bubblegum music—think Brenda Fassie, Chicco Twala, Yvonne Chaka Chaka and Sipho ‘Hotstix’ Mabuse. It’s fun, colourful and heavily influenced by South African disco in the late ’80s. I love dance music and I think I’ve unlocked how to manoeuvre around it.”

“This is about lethal love—one that’s slightly toxic but it feels good. The production sounds exactly like what the song is about…it’s very unexpected, very rough, and the drums are a bit rude. Love can be as beautiful as it is dangerous.”

Enjoy ‘Rumble In The Jungle’ below. Kabza De Small – I Am the King of Amapiano: Sweet & Dust (Full Album)