Ghanaian singer-songwriter, King Promise attains an incredible feat with his debut album ‘As Promised‘. Released in 2019, the 15 track-listing with collaborations like Sarkodie, Kojo Antwi, Wizkid, Omar Sterling and others officially introduced King Promise to the world and ever since kept up with the pace.

On Monday 5th of July, King Promise posted on his respective social media timelines the total number of streams his debut album has been able to amass. Announcing the 100 Million plus streams he posted;

everything else can lie, but numbers don’t lie ! 100 MILLION + streams for my debut album #AsPromised . Happy #AsPromised anniversary 05/07/19 ! Stream the hell out of it today! Love y’all. Thank you 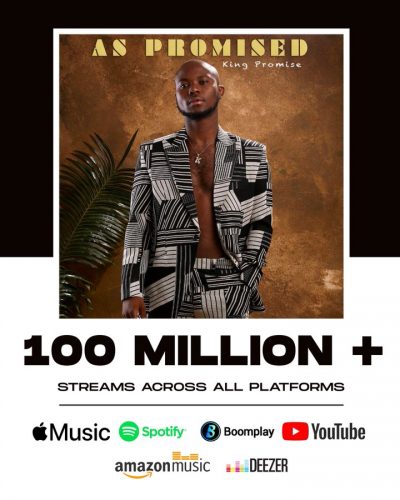 Lastly, another King Promise is coming this year. Excited?