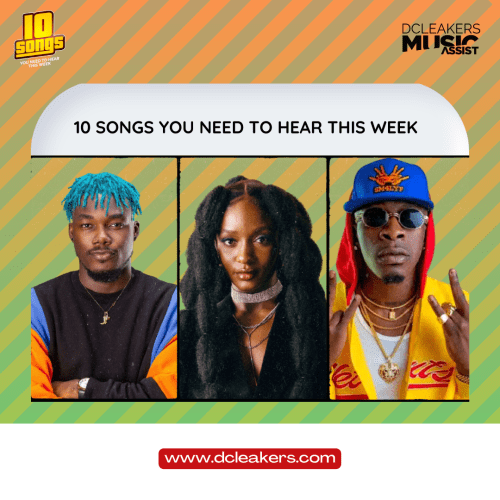 Cina Soul, a talented Ghanaian musician, returns from hiatus with a new track as the Libra season winds down.

Cina Soul hasn’t put out much new music this year after the successful release of her ‘For Times We Lost’ EP in 2021. She is making a comeback with the amazing song “Waiting” to make up for all the time she has been away.

She invites Camidoh, a talented producer and vocalist from Ghana who is now in good form. The duo traded fantastic verses, making the tune a good blend of vocals.

Chidozie Godsfavour Ugochinyere, also known as Fave, is a vocalist and songwriter from Nigeria who isn’t showing any signs of slowing down. Fave is positioned to retain the trajectory as a result of the traction generated after her ‘Riddim 5 EP’s enormous success.

FAVE provides a beautiful masterpiece called “Scatta Scatta” in a high voice key over the piano-led beat. Fave has proven her value since being named one of the up-and-coming artists to watch in 2022. She has been able to match the attention she has received with the works she has released, and everything appears to be going according to plan.

Mavin Records singer-songwriter Ayra Starr has had a remarkable year. Rush and the Bloody Samaritan Remix, which featured Kelly Rowland, are only two of Ayra Starr’s beautiful compositions.

The Queen of Afro-house music Niniola makes a return to the music space with a new single titled ‘Fuku.
The song ‘Fuku’ is an uptempo Amapiano/Dance song that sees Niniola telling her guy that with her, is where he should rather be than with some other girl. The song is a definite party cracker produced by one of South Africa’s finest, Smangori & Black Messiah.
‘Fuku’ is a follow-up to her previous release ‘Want’ which was released in June.

Prior to the official premiere of “Honeydoom,” she released a song called “Hard” featuring Moonchild Sanelly.

She released her EP, Honey Doom, to cap off the month of October. It talks about relationships’ “bittersweet nature” and the heartache that frequently accompanies them. On songs like “Hard” and “Freak,” her delicate voice is layered over dance-inspiring sounds.

In the song ‘Kumbaya,’ Herman Suede dwells on a variety of influences and experiences in “Kumbaya,” which was produced by rising Nigerian producer Frosh Tunes and mixed and mastered by MikeMillzOnEm.

The feel-good ‘Kumbaya’ will be Herman Suede’s first release in 2022 after the success of last year’s love-themed “Bittersweet” EP, which led to the well-received singles “One By One,” “Meant For You,” and “Naa Kwarley” and garnered him a nomination for “EP of the Year” at the 3 Music Awards.

Ghanaian singer-songwriter Wendy Shay gives her fans and listeners an early look at what to anticipate from her upcoming Enigma EP.

With its catchy tune and relatable plot, “Heaven,” by Wendy Shay, from the Enigma EP, has the potential to become a mainstream hit.

This masterpiece was produced in collaboration with Wendy Shay and Jay Scratch.

Shatta Wale, a celebrated Ghanaian dancehall performer with an impressive resume, turns 37 today. He releases new music as part of a yearly routine to mark this important day in his life. Shatta Wale has released a new song, “Cash Out,” which is the first single from his upcoming “Gift Of God” album.

According to reports, Shatta Wale’s “Gift Of God” was supposed to be released today, but for reasons that the general public is unaware of, the album is still in limbo. Here is “Cash Out,” which was co-produced by Shatta Wale and Gold Up Music, while we wait for the album to be released.

With his most recent album, “Patek,” which features Joey B and DJ Tarico, Nigerian Afrobeat singer and songwriter Oluwatosin Ajibade, better known as Mr. Eazi, has the world in a chokehold. The song has sparked a challenge on the video-based social media platform Tiktok, which has had an impact on current top songs.

Mr. Eazi releases a remix to maintain the song’s momentum. He keeps the original’s contributing artists on the remix while also inviting Falz and the South African music duo Major League DJZ.

The song gets a fresh vibe from Falz and Major League DJZ, which makes it more lively.