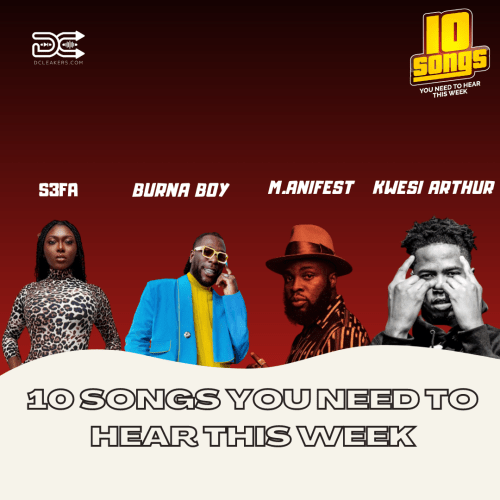 Sefa features the legends Sarkodie from Ghana and Dj Tira from South Africa on this soothing record.

This comes off the back of her label signing a worldwide distribution deal with Sony’s The Orchard and retaining SONY ATV as their publishing company worldwide and her having the number #1 record in Ghana for the past 3 months with her monster hit ‘E Choke’ featuring Mr. Drew.

Ycee memorialises the differing phases of a blossoming romance with focused reflection. Eschewing the stylistic pluralism that defined 2019’s Ycee Vs Zaheer, the Afro-fusion star settles on a minimalist pairing of neo-R&B and Afrobeats influences that complement his breezy lyrics, creating an immersive universe built around electro-influenced beats (“Abeg”) and smoky drums (“Anymore”).

‘Love Drunk’ is a 7-track album which details his storytelling with pointed clarity, pondering forgiveness on “My Ways” while gently riding the smooth waves of “Intentionally” to promise total devotion to a romantic interest and celebrating the warmth of love with a funky essence on “West Indies”. The mood here grows more intense, giving way to the braggadocious confidence of “Nu Riddim” and a sweltering reunion between Ycee and Patoranking (“Aunty Lovina”) that closes out the project. Ycee’s soothing voice is at its most urgent, guiding a sonic odyssey that meanders between the grieving ache of heartbreak, the lonesome anxieties of separation and, ultimately, the bliss of reconciliation.

Mayorkun – Back In Office

Nigerian singer and songwriter, Adewale Mayowa Emmanuel widely known as Mayorkun dishes out this song titled ‘Back In Office’.

The DMW afrobeat musician gives listeners plenty of excitement on this song.

As we await his ‘Madina To The Universe’ studio album, M.anifest gives listeners a sneak peek of what the project will be offering.

In his latest release titled ‘Scorpio Flow’, M.anifest showcases his lyrical dexterity, solidifying his status as of one of the continent’s best rappers.

Tripcy, yesterday, has released according to him, his last single for the year 2021. On this Amapiano inspired record, Tripcy tagged team with Lady Du (South Africa) & Dj Pee Raven (Resident Dj for ace nightclub, Ace Tantra).

Following a successful release of his collaboration with Don Jazzy, ‘Question‘, Burna Boy churns this potential street anthem for our listening pleasure.

The award-winning rapper showcases his punch lines and lyrical dexterity on his latest song. Fellow rappers, watch out as Kwesi is back to claim the ‘Best Rapper’ crown.

Ghanaian Afrobeat singer-songwriter, Tibu returns from hiatus with a new single. Yammydondada , as also referred to as makes his debut appearance for the year with a new solo effort he titles ‘Numbers’.

Produced by MoorSound, Numbers sees Tibu lay an easy-going fine textured verse and doing what he does best on a beat.

Tibu’s headline account for the year ‘Numbers’ is a follow up to his previous release titled ‘Amnesia‘, released last year September.

Ghanaian Urban Gospel singer-songwriter, Scott Evans pursues his new found love for the thriving Amapiano genre in his new release titled ‘Ma Pe K3’, a Ga Adangbe phrase which translates ‘What Will I Do?’ in literal term.

The songs seeks to give GOD the ultimate supremacy as he’s sustain us beyond our doings. Be that as it may be an inspirational record, Scott Evans laces the Nektunez produced song with an animated overtone, switching between Ga Adangbe, Pidgin and English dialects.