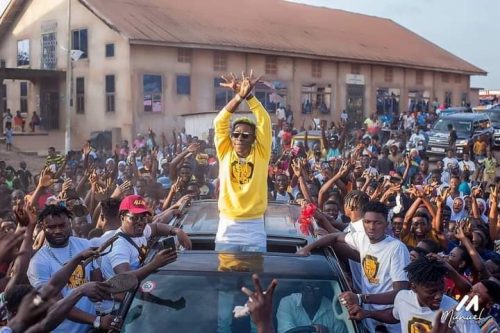 The Fan-base of the self acclaimed African Dancehall King – Shatta Wale has been awarded for their good works and support during the year 2020.

The Shatta Movement Empire bagged a nomination in the ‘Best Fan-base Award’ category at the 2021 MTV MAMA Awards which is scheduled to be held in Kampala, Uganda on the 20th of February 2021 in a virtual set up that will be broadcasted live on MTV Base.

The 2021 MTV MAMA Awards announced the first batch of nominees on 8th of December 2020 and subsequently announced more categories on January 12, 2021.

Shatta Movement will be competing with Wizkid FC, Fans of Eddy Kenzo, Diamond Platnumz amongst others for this prestigious plaques.

Shatta Wale reacted to the news via the tweet below;

Shatta Movement record yourself voting Shatta Wale as artiste with the ‘Best Fanbase’ in Africa and post with the hash tag #MTVMAMAShatta to vote. This is your awards. Thank you @MTVBaseAfrica 💪#1DON #SM4LYF #1DonStreamingMinded pic.twitter.com/E3Sr4Dcmqq September 25, 2018
Newsletter
Enter your email address to subscribe to this blog and receive notifications of new posts by email.
NEW MUSIC