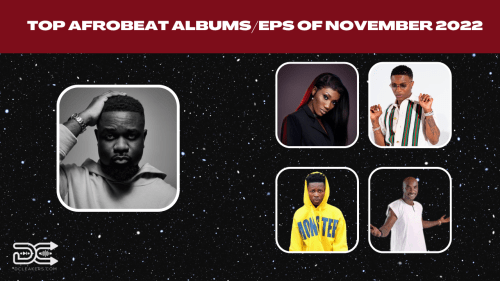 The noteworthy albums released in November included Sarkodie’s ‘Jamz’ EP ”, Wizkid’s long-length studio project “More Love Less Ego”, Kwabena Kwabena’s amazing ‘Fa Me Sa’ body of work, and more. The frenzy that surrounded each of these albums was a clear indication that they were among the most anticipated musical releases of the year.

Afrobeats, R&B, Amapiano, and tropical pop are among the elements that the renowned Ghanaian rapper Sarkodie lets loose on his 2022 album JAMZ, a 10-track-list body of work.

“It’s influenced by the new wave of Afrobeats and the sounds coming out of Africa,” Sarkodie explained in an interview with Apple Music.

“When the album started being recorded, I realized these are back-to-back, commercially good, playlist-type records—so this project combines all sorts of jams in one.”

Wendy Shay creates a captivating musical work that explores the theme of a captivating love story in Enigma. Following the increasing popularity of her precursory release, “Heaven,” the seventh single housed under this project, the Ghanaian singer releases a seven-track extended play. In the seven tracks of “Enigma,” Wendy Shay explores multiple aspects of a love tale without any help or additional features. Her remarkable compositional talent makes it clear that she has strength as a soloist.

The EP ‘Enigma’ is sure to hook you after the first listen as most of the tracks on the project have replay value.

The prolific rap sensation has under the auspices of his Strong Empire Label sorted fans out with his highly anticipated 7-track EP.

Other tracks on the EP include Goated & Ekwan! It’s a holistic masterpiece with something for everyone from the Afrobeats lovers jam right down to the indigenous bass lines and slashing high hats of a dope hip hop tune.

The Buokrom Boy EP translated to mean ‘Stonecity’ is named after a famed neighborhood in Kumasi, the capital of the Ashanti Region where Strongman hails from.

He takes listeners right back to his roots where it all began and gives a taste of what indigenous music sounds like from his hometown with the fusion of the Adowa rhythm and his dope bars.

The prolific writer and dynamic singer whose silky voice and enticing melodies have appealed to fans for over a decade have released on this day, 11 November a new body of work.

Christened ‘Fa me Saa’, the new album is a 14-tracked project that extended 8 invitations to other acts to feature on. Adding a contemporary feel and a youthful audience to this album features rappers Yaw Tog, Kofi Jamar ,Tulenkey and D Black.

A quartet of singers on the album also are Trigmatic, Sefa, and lynx label mates Kidi and Adina. Surprisingly dancehall heavyweight and African superstar Shatta Wale was also featured on the album which has been made available on all digital streaming platforms.

The star-studded tracklist boasts of songs like Sweetie, Focus, and Konkonsa among many others.