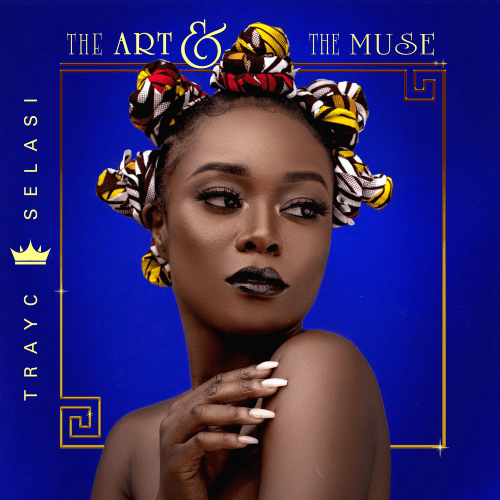 The multi-dimensional, dynamic & sultry afrobeat, R&B and dancehall musician gives us yet another incredible body of work. ‘The Art & The Muse‘ is a 6-track album which features silky vocals’ songstress, Efya and the artistic Worlasi.

Trayc brings to bear her talent and singing prowess on this dulcet multi-genre album for your listening pleasure.

Kindly stream and download Trayc Selasi’s ‘The Art & The Muse’ album below;

Although Trayc was born in Ghana she spent her formative teen years in London allowing her to fuse her African roots with Western Experiences to create an energetic blend of sounds and culture.

Her early musical inspirations were artists rooted in different parts of Africa such as Yvonne Chaka and Angelique Kudjo. In her teen years she discovered R&B/Soul which opened her up to the greats such as Alicia Keys & Mary J Blige who she has all had the pleasure to meet. RnB/ Soul expanded her musical palette also to Jazz, Neosoul and much more.

You may have come across her dance videos ‘Antenna’ and ‘Dangerous Love’ which kicked up a storm on an international level, reaching over 22 million views on YouTube. Selasi has performed alongside Fuse ODG at the Ghana Music Awards 2013, as well as performing at private functions held by Vodafone Ghana. She has toured internationally with Fuse ODG, performing in and across the UK including countries throughout the African continent. Alongside her dance partner, Selasi has performed at Notting Hill Carnival, MOBO Awards, Capital FM Jingle Bell Ball as well as internationally renowned festivals such as Wireless and Glastonbury.

Selasi is now focused on her music and emerging on the scene as an artist. She has already released 5 singles and created a new project entitled Traycing Lines where she creates music covers to some of her favourite songs from old to new school. In November 2019 Trayc released “Bottom Power” creating a buzz and a resurgence for the Trayc Selasi Brand. She then proceeded to Ghana for a Mini Tour which included stages such as King Promise- Promise Land, E.L Show, La Meme Gang-Crusades, Ice cream Festival, Food Truck Festival and connecting with the youth of Ghana by performing at Saint Marys Girl School, various Radio and Tv stations i.e.; Metro Tv, Live91.9 FM etc and also connecting with important influencers such as Ameyaw Tv. Trayc came back to the U.K.

She hit the ground running by performing at the Teni Billionaire show at the prestigious Indigo 02 and The King Promise London show at SCALA. Transitioning to the forefront in 2020, The Rising afro-fusion star Trayc Selasi made international waves with her E.p ‘THE ART & THE MUSE’. This led to a successful virtual Concert in 2021 curated by her team Coèlle•LDN. The release of her highly anticipated Visuals of her lead single ‘Somebody’ on July 1st has amassed over 9.9K & quickly growing.