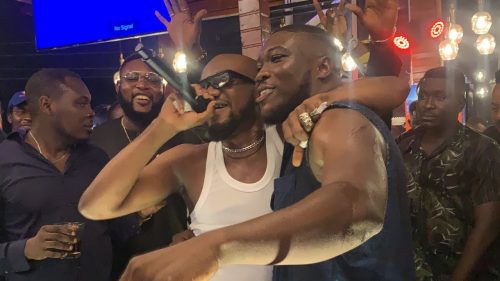 Mr Drew and Krymi were at loggerheads with Kurl Songx over the rightful owner of their smash hit single “Dwe” featuring Sarkodie. Krymi and Mr. Drew refuted the allegations levelled against them by Kurl Songx concerning who was the writer of the song, whereas the latter kept his ground and maintained his stance.

This issue led to a break-up of the relationship between the trio.

However, in a video sighted by DCLeakers.com, published by Sammy Kay Media, Kurl Songx was seen partying and performing with Mr. Drew alongside Kwabena Kwabena at the Paddies pub and Lounge in Accra.

The two set their differences aside to smoke the peace pipe as they reunited to wow the crowd with a splendid performance.