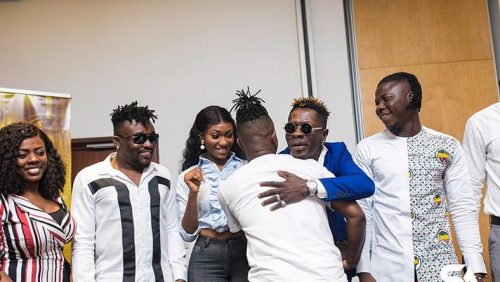 RuffTown Records Artiste, Wendy Shay has reacted to news of the sack of her rival Kelvyn Boy from Burniton Music Group.

On Tuesday September 24, 2019, Kelvyn Boy was axed from the Burniton Music Group over what management termed as bad conduct.

A statement to that effect reads in part ” as announced by the Chief Executive of Burniton Group Limited (the company) during recent media engagement, the company has recently been in the process of auditing its relationship with its officers and associated act for the purpose of re-organisation of its internal structures. The audit process was completed today and the process of its release is to update BHIM Natives and the general public on its conclusions.

Mr Kelvyn Brown (KelvynBoy) and the company entered into an agreement dated January 22, 2018 which, to a large extent, governed the relationship between both parties (the agreement).

The agreement had a initial term of 1 year and provided with an option to extend the tenure for a further period of 4 years (the option).

Consequently, the company has decide to release KelvynBoy from the agreement and he has been duly notified of this decision.

Accordingly, KelvynBoy ceases to be artiste under the company and will no longer be associated with the company and/or the BHIM Nation brand. We wish him in his future endeavours

His arch rival in the industry, Wendy Shay reacting to the news in a tweet said ” Don’t be amused by someone’s downfall cos urs might come faster than u think”.